I’ve recently become a father for the first time. Far from it being the traumatic, life-changing experience I’d been warned about, I’m actually really enjoying it. Nappy changing, sleepless nights, patches of milky vomit adorning all my favourite shirts – nothing gives me greater pleasure... Well, one thing actually does – reading to my daughter.

In the months leading up to her birth, my wife and I bought, borrowed and were given stacks of children’s books. Living in the Gaelic-speaking Western Isles, we were even given a Gaelic version of Spot the Dog by the local hospital. Given that a.) I don’t speak a word of Gaelic and b.) I can’t think of any reason why I should learn a language that sounds like something from Lord of the Rings, it’s pretty unlikely she’ll ever learn where that frisky puppy was hiding. No, I decided that my daughter’s first story should be something we can both get our teeth into (or at least have a good old slobber on). That’s why every evening I read her Herman Melville’s masterpiece, Moby Dick. For me, it doesn’t get better than Melville’s epic. There’s something almost transcendental about the book. It’s as though the topic of whaling is just too big for the author to keep under control and it breaks free from the rest of the story to run rampant through the pages. It’s more than a novel, it’s an experience and one that I wholeheartedly recommend to anyone with a bit of patience.

I’m sure that some of you out there are shaking your heads and saying that she’s too young to appreciate the story. You’re probably right. She’s only three months old and is unlikely to appreciate anything more than pretty colours or the taste of whatever she shoves into her mouth. I do know, however, that she appreciates the rhythm of Melville’s stupendous prose (on a par with Shakespeare, in my opinion) and like the sound of the sea, it lulls her to sleep each night.

So, there you have it, I’m a card-carrying fan of Moby Dick and I’m trying my hardest to convert my baby daughter to the cause. This is a fairly easy task, especially considering that, as yet, she is unable to voice any complaint. Converting others to the cause is slightly harder. Like War and Peace, Melville’s book is one of those that many people have on their “to read” list but seldom find the time to get round to. Many acquaintances of mine from across the Atlantic give an involuntary shudder at the very mention of the book, harsh memories of American Literature lessons permanently scarred on their cerebellum. As many teachers know, if you don’t deliver these things correctly the first time around, the student may never pick up the book again. If you are introducing a challenging novel to young people it must be made accessible above all else.

Imagine my joy then when I discovered a pop-up version of the classic tale. Sam Ita has done an amazing job of condensing the huge novel into a very detailed 12 pages. Okay, so the extended meditations on the nature of man and the importance of whaling to the modern world have been excised. Not a huge loss in terms of storytelling, though I would have been interested to see how Ita could have handled the chapter exploring “The Whiteness of the Whale”. Jettisoning such superfluous philosophy, Ita highlights the beautiful simplicity of Captain Ahab’s hopeless quest for the terrible white whale. Ita’s picture-book style makes the story accessible for a younger audience without resorting to unnecessary cuteness. The book is well put together (essential for a children’s book) and appealingly colourful. What really makes it stand out against other bowdlerised versions of the text are the truly wonderful pop-up creations. It is hard to convey just how totally awesome Ita’s creations are without spoiling the surprises that each turn of the page brings. Highlights include a “working” telescope and a very detailed model of the Pequod complete with rigging. Some of the paper creations are so amazing that you find yourself gazing at them with slack-jawed wonderment, trying to figure out how anyone could make anything so complicated from such a simplistic medium as paper and glue.

Ita’s masterful paper-folding techniques bring the tale vividly to life, providing a perfect access-point for younger readers. That is the real purpose of books like this – to give children a taste of the classics before they are old enough to appreciate the original text. I’ve seen comic-book versions of Shakespeare, illustrated retellings of Dracula and Frankenstein. They’re even repackaging Wuthering Heights to appeal to fans of the Twilight series. Sam Ita’s pop-up Moby Dick, however, works on another level. Not only does it perfectly capture the drama and excitement of the original story, the dazzling pop-up creations make the book a work of art in itself.

My daughter isn’t old enough to appreciate this book, but I am sure that one day she will. For now, she’ll be content with me reading the original whilst she drools and gurgles and gnaws gummily on whatever comes to hand. 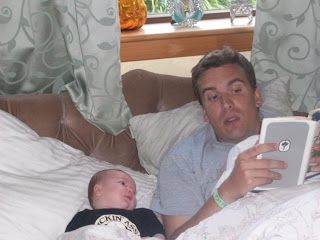 We LOVE our Followers!